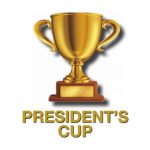 Billy Rutherford and the story behind the President’s Cup.

Over many, many years Billy Rutherford worked tirelessly and lived for the Belfast and District Motor Club. From Traffic Control, Chief Flag Marshal, Chief Marshal at both Carrowdore and Kirkistown, Committee Member and Chairman through to finally becoming the Club President following the passing of Joe Boyle. 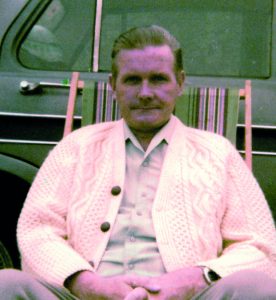 Unfortunately as we moved into the new millennium Billy became terminally ill and as his health deteriorated he had to give up his role as President. Through those dark days his family decided, as a mark of respect and recognition for the lifetime work he had put into the Club, that they would organise something which they could donate as a mark of remembrance. Hence the President’s Cup. Billy was so very proud of both his family’s thoughtfulness and this ‘Trophy’ that all home visitors were shown it virtually as soon as they came through the front door.

Then family and Club were dealt a cruel blow. Billy passed away on the 6th September 2002, the day before the Club’s event which was to see the handing over of the President’s Cup to its first winner. Understandably there was much sadness not only within the family circle and Club but also the whole motorcycle racing fraternity. 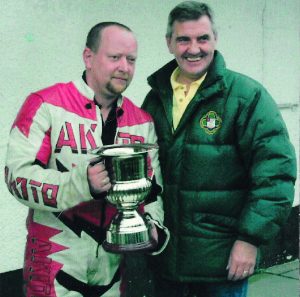 The event did go ahead and the first name to adorn the President’s Cup was Johnny McCay, winner of the Clubmans Class Handicap. The ‘Cup’ was presented by Billy’s friend and colleague Vice President Bill Simpson who was to be elected Club President later in the year at the AGM.

The Rutherford name still continues with Gerry, our Competition Secretary, who is also a mind of information no doubt inherited from his father and his own long association and work within the Club. The next two generations are involved too with Gerry’s daughter Lorraine and grand daughter Naomi assisting with Club duties throughout the year and on race days.

Awarded to the winner of a scratch race as indicated