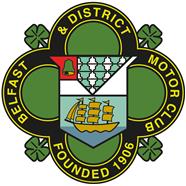 Until 2000 the Club was known for promoting one of the best road races in Ireland, the ‘Carrowdore 100’. The Club was also previously involved in trials, holding an annual event at the Lead Mines just outside Newtownards, County Down.

Today, the Club is associated mainly with organizing three Open Short Circuit Belfast & District events each year at the Kirkistown Race Circuit in County Down.

The Club also promotes its own Championships for Club Members throughout the year with winners receiving their Awards at the Club’s AGM in October.

The above video was produced by Janice Webb and Jonny Porter.